The Only Constant is Change

Think of someone, let’s say a CIO. Someone quick-witted, their intellectual feet light on the ground at every turn. Their problem-solving abilities are as creative as any genius’s. Skills that are open and clear. A leader is born even if unwilling. Because they can’t help but light the way.

Seeing ahead of the curve, these CIOs bring others along with them. Keeping them tuned into that vision. Add a couple of other like minded people. As Nikki Summers, Regional Director, Sage Africa said during the annual CIO The Year Ahead, “You have to have a workforce that adapts to change and if it doesn’t you have the wrong people.”

Now imagine these people as a single, efficient, constantly shifting organism looking to attach itself to others like it. They find you. You like each other. You join them. You fit in. Better yet, you push the limits of the organism. You have them jogging on the spot. Waiting for that GO! moment, probably greenlighting it yourself. You and the organism form an organization.

As a result, this tale qualifies as harnessing a culture of business agility. “Culture is everything. The trickiest thing right now is that how people are raised is very different from the work culture. For instance, until you come to work, you have never really had a customer. You just had parents who did things for you,” says Alan Lane, Senior Director, Huawei Technologies, who adds any new hires go through a 3-month training period that helps them be a part of the company.

As a result, perhaps there are a couple of Kipchoges supported by a team of just as accomplished superstar pacemakers. Therefore, there exists a company culture that is agile. Unfortunately, business agility in the age of a volatile, uncertain, complex and ambiguous (VUCA) climate, is the only way for a CIO to stay ahead. Furthermore, the ability to change and adapt creatively, like Netflix and Microsoft, becomes the difference between the life or death of an organisation.

Business culture is influenced by adaptability, which is even harder to do in a cross-generation workforce as Ali Hussein, co-founder and CEO, Kipochi Limited says, “Millennials and Gen Z have zero respect for master and commander. It is one of those soft things that imperial CEOs don’t really understand. Now the world needs 3Qs; (Intellectual Quotient) IQ, (Emotional Quotient) EQ, and (Social Quotient) SQ. Now there is something called AQ – Adversity Quotient. These all have a place in the workforce.

And it inspires them to do things that keep harnessing the power of culture for business agility. Thankfully, this happens in the most simple of ways, points out Nikki Summers, “If they do not have to sit in traffic for 2 hours to get to work at 8 to 5 you will probably find they are more productive because they can get more work done.”

A Gallup poll of 5,500 American and 4,000 European employees found that those who agreed that their company has “the right mindset to respond quickly to business needs,” and “the right tools and processes to do the same,” had the following 8 attributes. 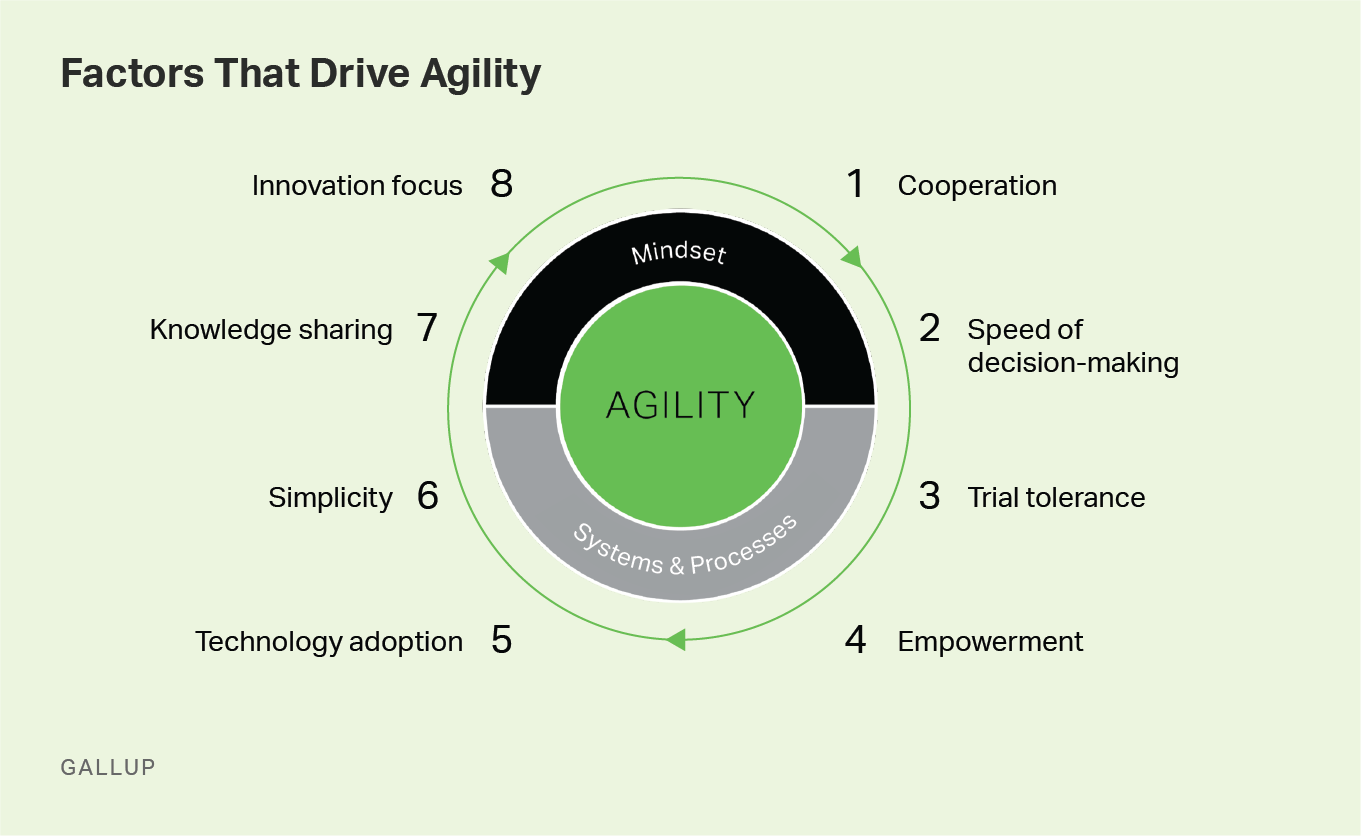 But when does a CEO have time to run the company and company culture and handhold their employees? Mercy Wanja, Ag. Director General, Communications Authority has an inkling. “When the industry started questioning some of the work principles, it makes you do a double-take, and we have to go back to school. Handholding needs to star early so the students can walk into offices understanding critical thinking.” The problem is education has not stepped up. How do organisations fill that gap? There is a reason tech companies such as Huawei and Google don’t need papers. It is because this is a new age of learning. While skills have always been an issue in tech, companies are now starting to looking at earning per employee. And, can said employee be agile and self driven in a world where both hard skills and soft skills are needed. Do they understand what your business is about? Is there inclusiveness and constant learning? The latter even more crucial because it is just not going to happen with universities. Leaders will need to start building resources they require.

The www.businessagility.institute Whitepaper, Hiring for Culture says it best. “Our goal is to move from hiring resources to hiring personalities and finally to hiring people.”

Do you have a story that you think would interest our readers?
Write to us editorial@cio.co.ke

How to Leverage The COVID19 Pandemic As A Digital Transformation Catalyst

Bloggers have to pay over $900 to operate in Tanzania

TV Stations to remain closed until investigations over

ABOUT US
CIO serves the enterprise community of CIOs and senior technology decision-makers with peer insight and expertise on Business Strategy, Innovation and Leadership. CIO attracts the highest concentration of enterprise CIOs and business technology executives of any media brand, reaching over one million decision-makers monthly. CIO provides unparalleled Access, Insight and Interaction with this audience.
Contact us: info@cio.co.ke
FOLLOW US
© CIO East Africa 2018
X Close
MORE STORIES